Man, do I love this piece. And that’s even before we sing a single note.

I’m currently sitting on the risers as we do a final full run through of Mahler’s 2nd, the “Resurrection Symphony.” Since we only sing at the end of the final movement, it’s a bit annoying to “practice sitting on stage” like we will for four performances (Thursday, Friday afternoon, Saturday, and Tuesday). But it means the best seats in the house for an extra performance.

First of all, what a spectacle. Two harps. A percussion section with two timpani players, bells, a huge drum, a snare drum, and an array of other effects. An organ that only plays at the very very end – the organist spends even more time waiting than we do! A long pause between the first two movements to “clear the palate” from a heavy, hero’s journey and death as we transition to an airy 2nd movement ending with the most beautiful extended pizzicato string section you’ll ever hear. Then the crazy third movement marches through with its sudden outbursts of brass. Then the most beautiful interlude as one of the soloists takes the stage for her brief homage in a short expressive moment that almost brings tears to my eyes every time. Then the crazy final movement, with players slinking off stage so they can play the distant horn calls and the ominous sound of the approaching army, contrasting the meter and character of the tense on stage scene. A beautiful tuba + trombone quintet.

And do we ever! The quietest sound you can imagine, a breath of air from departed souls over the quiet of an empty battlefield. But by the end, the loudest any of us can possibly sing, in a bombastic barrage of sound that washes over the audience. We Will Rise Again, yes! We Will Rise Again!

Maestro Dohanyi has been customarily brutal in rehearsals. There’s no other way to say it: he is “fussbudget” and has no qualms about making us sing the same passage a twentieth time because on the nineteenth time he felt the /st/ of unsterblich was right on the beat and he had asked us to make it a little late. The result is an exasperated chorus that sings at a higher level and doesn’t treat this as a mail it in performance. The Dutch, they use every part of the German word. Each /l/, each /f/, each /ich/ better be there or we hear about it.

But above all that, he wants us to tell the story. To transcend the music and notes twelfth and communicate this message of hope and triumph. I think we are almost there.

Oops! Time to sing. Hope I can hit a low b flat after sitting for an hour 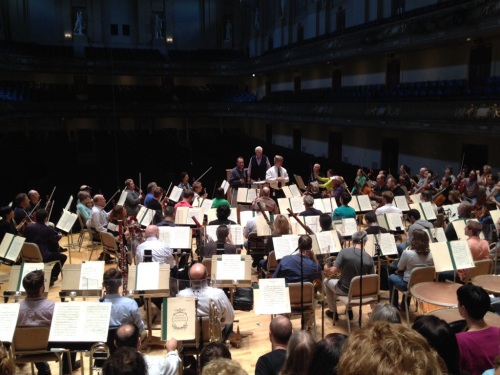 This entry was posted in TFC and tagged dohanyi, mahler, rehearsal. Bookmark the permalink.

5 responses to “Thoughts midway through a Mahler 2 Final Rehearsal”