From the opening 20 minute movement, throughout most of the first half, it functions as a musical personification of a grieving mother before her dying son. And even the later movements, excluding the apotheosis and redemption of the final movement, all have an undercurrent of yearning and loss, representing the prayers of a supplicant asking to share the burden of her grief.

Don’t get me wrong – I’ve sung many sad moments in lots of musical pieces.  The lament for Oedipus at the end of Oedipus Rex is sad, but in a less personal, Greek chorus sort of one-minute farewell-to-thee.  Every Lacrymosa of every Requiem Mass has its own brand of sadness, though they’re often tinged with fear, too.  And other Stabat Mater settings, such as Verdi’s, also try to capture sadness.

I’d argue, though, that most sad choral music is melodramatically, stereotypically sad.  It screams, “Look at us, we are SAD!”  Minor keys, wailing violin accompaniment, soaring melodies that decrescendo as the line lingers on the seventh of the scale before falling to a hushed cadence.

The Dvořák sadness is personal, not ostentatious.  It’s a crushing, persistent grief.  It’s a mourning that sees no future without more mourning. Its consolation is only by crying it out through nine movements before it approaches a sense of hope and redemption at the end. As I wrote about in my previous post, Dvořák had suffered through the separate deaths of his three children, two within a month of each other.  I’ve been fortunate in my life not to have lost any immediate family so far, but this is how I expect that to feel when it happens.

Next time you see me (or anyone singing the piece this week) in person, ask us to sing the opening lament by the soprano section.  It will break your heart.

To accomplish this effect requires a lot of precision, but without looking precise — the musicality still has to shine through the proper cutoffs and rhythms.  Our choral director James Burton has been reminding us of the important of shaping every phrase,  not just when the hairpin dynamics are explicitly indicated.  We’ve played with the balance of voices, as different parts take control of the melody or serve as the tonal foundation that others play around.  (That’s personally fun in the third movement, where the basses take command of the melody… though Andris Nelson’s deliberate tempo will be challenging for us!)  We’ve had mixed success capturing the dramatic changes in dynamics.  With all the things going on, sometimes it’s hard to remember that pp doesn’t mean “mezzoforte,” and that not all fortes are equal — we have to hold something back for those dramatic buildups or there will be no climax left for the audience at their peaks.

After an admittedly shaky initial piano rehearsal earlier in the week, though, we redeemed ourselves in the first full orchestra rehearsal last night with some magical moments.  We’re looking forward to bringing this emotional piece to life this weekend.

I’m thrilled to be on the Tanglewood Festival Chorus roster for the performance of Antonin Dvořák’s  Stabat Mater at the end of February.  We are deep into the rehearsal cycle, exploring the choral blends, hairpin dynamics, and unusual tonalities that mark Dvořák choral music.

There’s one particular musical bookending in the Stabat Mater that’s so full of emotional payoffs it gives me goose bumps every time I hear it.  Here’s some background and music theory to explain why:

It translates to The sorrowful mother stood, weeping by the cross where her Son was hanging.  Once you learn that Dvořák wrote this piece after the deaths of his three children — Josefa two days after her birth, then later his one-year-old daughter Ruzena from phosphorous poisoning, and within a month three-year-old Otakar to smallpox — you understand just how much emotional anguish Dvořák poured into composing this piece about a parent watching a dying child.

Dvořák sets the first movement in b minor, but makes heavy use of diminished chords.  Because diminished chords are four symmetrically spaced minor triads, they don’t really belong to any one key signature.  They are “scary” music chords – not discordant, per se, but implying anger, passion, fear, or danger.  They also muddy what key you’re in, because they can resolve in a lot of different directions.  (By no means did Dvořák discover the effectiveness of these chords; even baroque composers used them.  My favorite is the crowd screaming to release Barrabas instead of Jesus in the St. Matthew Passion.)

See and listen to how he builds up the drama, about 9 minutes into the first movement. The chorus crescendo peaks as the timpani join the orchestra for a giant diminished fortissimo chord, echoed two measures later.

This is repeated again a minute later, before the soloists join in… and again about 140 measures later at the recapitulation right before the end of the movement… and again after that!  So he’s pretty much established that giant build up leads to big scary diminished chords, suitable for a despondent Mary weeping at the feet of Jesus.

Fast forward to the tenth and final movement of the piece.  The text has moved from lamenting Mary’s fate to praying that she’ll defend us on our days of judgment:

The final movement takes this translation — When my body shall die, grant my soul the glory of paradise — and puts it in doubt.  “Please, please, PLEASE let me into heaven when I die!” And then… uh oh!  The same theme that we heard at the beginning plays again.  We had this beaten into us already: this is the sad, scary music!  We’re not gonna make it!

Until… instead of dramatic, unresolved tension… it’s a psyche out!  Paradisi gloria bursts forth in a G major chord instead of the diminished chord, taking us back to D major. 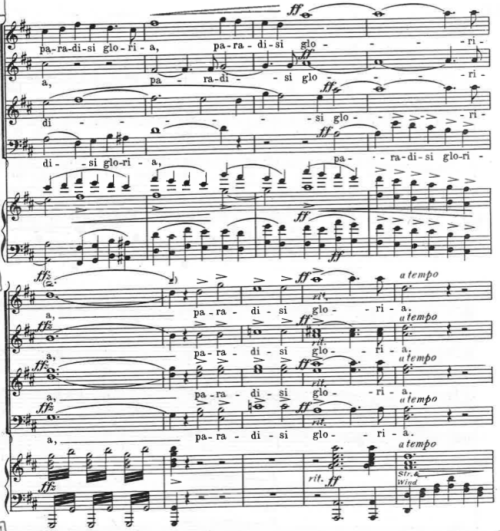 Love.  It.  This is the introduction to the end of the piece, where suddenly this lugubrious lament turns into a celebration of making it into heaven, including a thrilling a capella confirmation of yes, we made it to paradise that echoes the major twist above.

Dvořák must have liked this trick, because he did it again about 13 years later in the Dies Irae his Requiem mass.  First listen to his build up on cuncta stricte discussurus as the chorus sings about the Final Judgment.  Then listen to the recapitulation when, instead of going back to the day of wrath, the piece charges forward into a major key, bells ringing, to talk about the majestic trumpet sounding to call all the dead forth to God’s throne.

These are the music theory equivalents of whodunit plot twists.  Setting you up with foreshadowing, then zig instead of zagging with an unexpected progression.  They hit you over the head and say, “Pay attention!  Something momentous is happening here!” in a way that dynamics and rhythm alone can’t achieve.